Are we ready for autonomous cars? This is the question I have been asking myself recently, and maybe you have the same question! Of course, as far as I am concerned, since my teenage daughter started to learn to drive, I have been somewhat concerned with my own interests. After she finished her first class, I asked her how her, and her answer surprised me a bit. It seems that driving itself doesn't make her worry, but the driver around her makes her uneasy. She complained that they were always too close to her rear bumper, they never used the turn signal indicator, and they would accidentally cut in front of her car in order to get out of the way. These complaints are very reasonable, and I feel the same with my own experience on the roads of Northern California.

This reminds me of autonomous cars that don't require a human driver to sit behind the wheel (of course, there may be one, but not the actual use of the steering mechanism from a traditional perspective). In contrast, a microcomputer host equivalent to a human driver runs a large amount of computer code connected to various sensor arrays inside and outside the vehicle. They are connected to the cloud and can simulate the external environment around the vehicle in real time, anticipating the actions that need to be taken based on the traffic conditions of the current four weeks. These operations are performed normally regardless of the scope and condition of the climate, environment and traffic conditions.

Unfortunately, an accident occurred in Arizona recently that a self-driving road test vehicle hit the biker. According to local police, the rider was crossing the road outside the sidewalk. Although the bicycle was at the scene of the accident, the police did not believe that the victim was riding a bicycle when the accident occurred. The victim was rushed to a nearby hospital and was declared dead shortly after arriving at the hospital.

At the time of the incident, there was a person behind the steering wheel of the self-driving SUV, but that person did not actually control the vehicle. According to local officials, there were no other passengers in the car at the time of the incident. It is worth noting that Arizona is one of the few states in the United States, and it is assumed that the driver's seat of a self-driving car does not need someone to take over the vehicle to be legal if necessary. However, such accidents do not increase public confidence in the autonomous driving ability of driverless cars.

There is no doubt that although the self-driving car will encounter some setbacks in the development process, it is gradually approaching us. Therefore, there are some questions worth considering: When do we really get into autopilot and how long does it take?

According to the analysis of the automotive industry, the automatic driving change path has two standard terms: one is evolutionary, just as many cars are gradually advancing (similar to Tesla's autopilot function); the other is revolutionary. That is, a fully-automobile car (as Google is developing). In my opinion, it is still unclear which path is successful, but the more likely outcome is the symbiosis of the two.

So how will it develop in the next few years? Based on the information I have obtained from experts in key industries, the following areas will be further developed:

Companies like Google will collect and accumulate data on every situation that autonomous cars may encounter.

Surveying and mapping companies will need to strengthen 3D mapping data support in major cities. Automakers and high-tech automotive system suppliers need to work closely together to ensure that light detectors, lidars, radar sensors, GPS and cameras work together. Cars incorporating these features must be tested in all terrain and weather conditions.

Looking ahead, by 2020, cars equipped with the above semi-automatic functions should be able to drive autonomously to pass traffic conditions such as intersections, traffic lights and parking. Despite this, these highly autonomous vehicles still require a human driver to sit in front of the emergency. It is expected that by 2024, these semi-autonomous vehicles will be able to operate normally under more severe conditions such as inclement weather and nighttime. By that time, Lyft taxi service providers may be able to start using these cars without any drivers. Of course, automakers need to make sure their cars understand the signals from passers-by, such as beckoning when crossing the road. All of these developments inevitably require automakers to carry many autonomous functions on their vehicles, so that it is possible to achieve a smooth start in the mid-2030s.

Of course, all the developments needed to achieve this timeline will create a great opportunity for the IC semiconductor industry, as putting it into practice will require many systems to add a lot of silicon technology content. These silicon technologies will consist of digital and analog integrated circuits (ICs).

Automated driving vehicles will obviously be equipped with numerous electronic systems consisting of different digital and analog ICs. They will include Advanced Driver Assistance Systems (ADAS), automated driving computers, automatic parking assistance, blind zone monitoring, smart cruise control, night vision, lidar, and much more. All of these systems require a variety of different voltage rails and current levels to ensure proper operation. They can be powered directly from car batteries and/or alternators and, in some cases, from power rails that are post-stage regulated via these voltage rails. The latter typically occurs in the case of a core voltage of a VLSI digital IC (such as FPG and GPU), which may require an operating voltage of less than 1 V and a current of a few to tens of amps.

System designers must ensure that the ADAS meets various noise immunity standards within the vehicle. In automotive environments, switching regulators are replacing linear regulators in areas where low heat dissipation and high efficiency are important. Moreover, switching regulators are typically the first active component on the input power bus and therefore have a significant impact on the EMI performance of the entire converter circuit.

There are two types of EMI emissions: conduction and radiation. Conducted emissions are connected to the product through wires and traces. Since this noise is limited to a particular terminal or connector in the design, as discussed above, with good layout or filter design during early development, it is generally relatively easy to ensure compliance with conducted emissions requirements.

However, radiated emissions are quite another matter. Anything that carries current on the board radiates an electromagnetic field. Each trace on the board is an antenna, and each copper layer is a resonator. Except for a pure sine wave or DC voltage, anything else produces noise across the entire signal spectrum. Even if it is carefully designed, the power supply designer does not really know how bad the radiation emission will be before the system is tested, and the radiation emission test can only be formally completed after the design is basically completed.

Filters are often used to attenuate signal strength at specific frequencies or over a range of frequencies to reduce EMI. This part of the energy that propagates through the space (radiation) can be attenuated by the addition of metal and magnetic shielding. The energy portion of the PCB trace (conduction) can be suppressed by the addition of ferrite beads and other filters. EMI cannot be eliminated, but can be attenuated to acceptable levels for other communications and digital devices. In addition, a number of regulatory agencies ensure compliance by implementing relevant standards.

In light of the application limitations described in this article, ADI's Power by LinearTM division developed the LT8650S, a synchronous buck converter that supports high input voltage, single-chip, low EMI emissions. The device's 3 V to 42 V input voltage range makes it ideal for automotive applications, including ADAS, because automotive applications must be tuned for cold start and start-stop scenarios with minimum input voltages as low as 3 V, power-off transients More than 40 V. As shown in Figure 1, the device features a dual-channel design consisting of two high-voltage 4 A channels that provide an output voltage as low as 0.8 V, which can drive the lowest voltage microprocessor core on the market today. With a switching frequency of 2 MHz, its synchronous rectification topology achieves efficiencies as high as 94.4%, while in no-load standby conditions, BurstMode® maintains quiescent currents below 6.2 μA (both channels are open). It is therefore ideal for systems that are always on.

The LT8650S's switching frequency can be programmed from 300 kHz to 3 MHz and supports synchronization over the entire frequency range. The shortest on-time as low as 40 ns enables a step-down conversion of 16 VIN to 2.0 VOUT on the high voltage channel at a switching frequency of 2 MHz. Its unique Silent Switcher® 2 architecture uses two internal input capacitors and internal BST and INTVCC capacitors to minimize thermal loop area. Combined with a tightly controlled switch edge and internal structure of the integrated ground plane, and a copper post instead of a bond wire, the LT8650S is designed to significantly reduce EMI/EMC emissions. Figure 2 shows the characteristics of the output radiation. Improved EMI/EMC performance is not sensitive to board layout, even when using a 2-layer PCB, which simplifies design and reduces risk. The LT8650S easily meets automotive CISPR 25, Class 5 peak EMI limits over the entire load range with a switching frequency of 2 MHz. Spread spectrum (SSFM) can also be used to further reduce EMI levels. 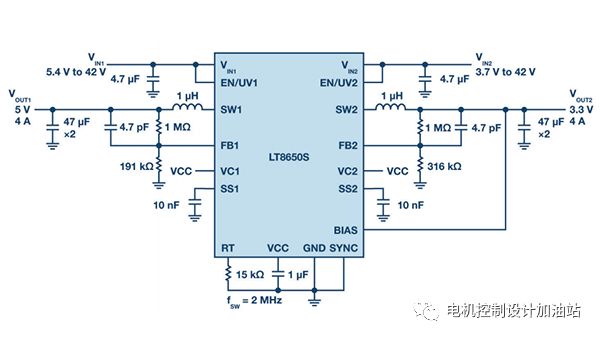 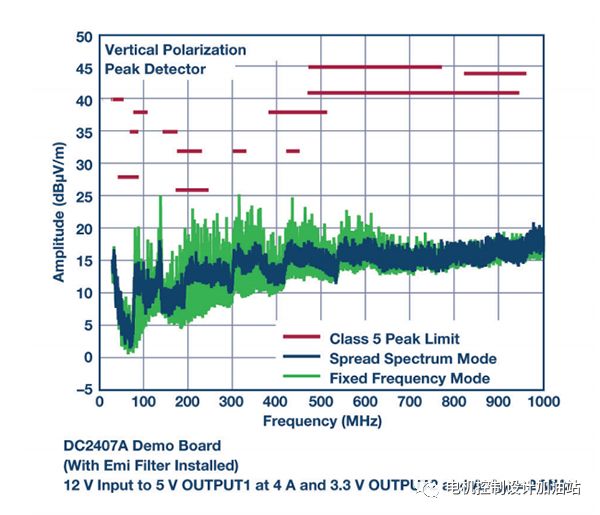 Similarly, for applications that require a wider input range than the LT8650S, we have developed the LT8645S, a synchronous buck converter that supports high input voltage, single-chip, low EMI emissions. With an input voltage range of 3.4 V to 65 V, it is suitable for both automotive and truck applications. These applications must be tuned for cold start and start-stop scenarios with minimum input voltages as low as 3.4 V and power-off transients exceeding 60. V. As shown in Figure 3, the device features a single-channel design that provides a 5 V, 8 A output. With a switching frequency of 2 MHz, its synchronous rectification topology achieves efficiencies as high as 94%, while in no-load standby conditions, the burst mode of operation maintains quiescent currents below 2.5μA, making it ideal for always-on systems. 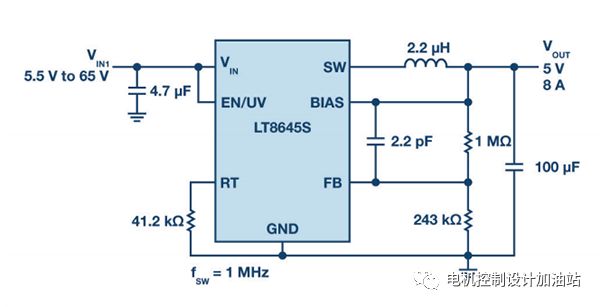 The LT8645S's switching frequency can be programmed from 200 kHz to 2.2 MHz and supports synchronization over the entire frequency range. Its unique Silent Switcher 2 architecture uses two internal input capacitors and internal BST and INTVCC capacitors to minimize thermal loop area. Combined with a tightly controlled switch edge and internal structure of the integrated ground plane, and a copper post instead of a bond wire, the LT8645S is designed to significantly reduce EMI/EMC emissions. Figure 4 shows the characteristics of the output radiation. Improved EMI/EMC performance is not sensitive to board layout, even when using a 2-layer PCB, which simplifies design and reduces risk. The LT8645S easily accommodates automotive CISPR 25, Class 5 peak EMI limits over the entire load range. Spread spectrum (SSFM) can also be used to further reduce EMI levels. 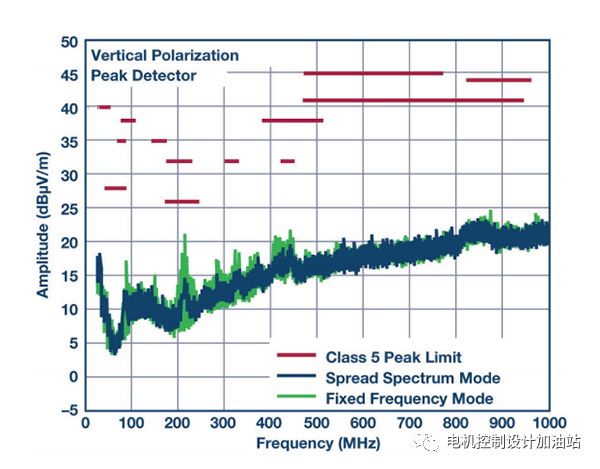 The automotive electronics systems required for autonomous vehicles (and trucks) are constantly evolving both now and in the future. Of course, the voltage and current levels will change. However, the requirements for low EMI/EMC emissions will not change – even in harsh working environments. Fortunately, ADI's Power by Linear product line offers an increasing number of solutions to help system designers meet the challenges of today, the future, and beyond the mid-2030s.