The car itself is constantly changing, as is the electronics that drive the car. The most notable of these are plug-in electric vehicles (PEVs), which replace the gas tank and internal combustion engine with a 300- to 400-V lithium-ion battery and a three-phase propulsion motor. Precision battery pack power monitoring, regenerative braking system and sophisticated transmission control optimize battery life so that the frequency of battery charging is reduced. In addition, today's electric vehicles or other types of vehicles have many electronic modules that improve performance, safety, convenience and comfort. Many mid-range cars are equipped with advanced Global Positioning System (GPS), integrated DVD players and high-performance sound systems.

Accompanying these advanced devices is the need for higher processing speeds. As a result, today's cars incorporate high-performance microprocessors and DSPs that reduce the core voltage to 1V and increase the current by 5A. There are many challenges in generating such voltages and currents for automotive batteries between 6V and 40V, one of which is to meet the stringent standards of electromagnetic compatibility testing (EMC). Linear regulators used to be the primary method used to convert automotive battery voltages into regulated supply voltages, but they are now out of date. More precisely, the linear regulator reduces the output voltage and causes the load current to increase. Switching regulators are becoming more widely used, with concerns about electromagnetic interference (EMI) radio frequency and the importance of safety systems.

The purpose of this article is to try to design an EMI-compatible switching regulator without fully understanding the complex EMI. In fact, all of the problems associated with EMI come from the rate at which the voltage and current variations in the switching regulator are not fully achieved, and how they interact with the parasitic circuit components on the board signal lines or within the components. For example, a 200 kHz step-down switching regulator powered by a car battery rated at 14V and generating 5V at 5A, for example, to achieve considerable efficiency, the voltage slope of the switching node should only account for a small portion of the conduction time, such as 1/12 or less. The buck converter with continuous conduction mode (CCM) has an on-time of D/fsw, where D is the ratio of the duty cycle or pulse width modulation (PWM) signal turn-on time percentage to the entire time (ton and toff), and Fsw is the switching frequency of the converter.

For buck converters operating in CCM, the inductor current is always a non-zero positive current. In this case, the duty cycle is D = Vout / Vin, which in this example is 38% (5V / 14V). When using a switching frequency of 200 kHz, we quickly calculated the on-time to be 1.8 μs. To support this frequency, the rise/fall time of the control switch must be less than 90 nanoseconds. This makes us notice the first way to reduce noise, which is slope control. You may not understand it, but at this point we are very familiar with the harmonics associated with the PWM switching node, which is the control waveform of the switching regulator. If this waveform is represented by a trapezoid as shown in Figure 1(a), the harmonics of the waveform can be represented in Figure 1(b), which indicates the driving factor behind EMI. This Fourier envelope defines the harmonic amplitude that can be obtained by Fourier analysis or by calculating the on-time and rise time of the trapezoidal waveform.

When observing the frequency domain, it can be seen that the trapezoidal waveforms with equal rise and fall times are composed of different harmonic signals, which are present in integer multiples of the fundamental frequency of the periodic signal. It is worth noting that the energy of each harmonic is reduced to 20 dB/dec at the first turning point (on-time) of 1/(π × τ) and subtracted from the second turning point of 1/(π × tr). Up to 40dB/dec. Therefore, limiting the slope of the switching node waveform can have a significant impact on reducing the amount of emissions. Through this discussion, it should be clear that reducing the frequency of operation is also conducive to reducing the amount of emissions.

One of the difficulties in the automotive EMI specification is related to the AM frequency band. This band starts at 500kHz and lasts until 2MHz, which is very suitable for switching regulators. Since the highest energy component of the trapezoidal waveform is the basic component (assuming no board resonance), it can operate up and down the AM band.

Is the duty cycle important?

Another important factor is that if the duty cycle is exactly 50%, all the energy of the complex trapezoidal switching waveform will be represented by odd harmonics (1, 3, 5, 7...). Therefore, operating at 50% duty cycle is the worst case. At the load cycle of 50% above and below, natural EMI diffusion occurs even if harmonics occur.

You can think of EMI as an unsuitable amount of energy that does not require too much and may violate the emission standards. In fact, EMI is a fairly low energy effect. For example, in the case of 1 MHz, as long as 20nW of EMI will violate the FCC's specifications for conducted emissions. Conducted emissions are measured by a spectrum analyzer that monitors the input source for high frequency components. The Line Impedance Stabilization Network (LISN) acts as a low-impedance filter for switching regulators and as a high-pass filter for line analyzer noise. Therefore, the input of the switching regulator is the next thing to note.

One of the main factors contributing to EMI in a car is that the switching regulator introduces AC current into the power line. These varying currents themselves have various waveforms of radiated and conducted emissions. For example, in a non-isolated boost converter, the input capacitor (C2) and boost inductor (L1) shown in Figure 2(a) form a unidirectional EMI filter for isolated line emissions. However, the input current has an AC triangular waveform of the Fourier extension of the waveform, as shown by the green signal line of Figure 2(b).

As soon as L2 and C2 are added, the waveform becomes sinusoidal and the energy is re-adjusted to a fairly low high frequency peak. However, if the input filter is not designed correctly, the noise is amplified and the control loop is unstable. Therefore, understanding the concept of filter design is important for optimizing filter echo and cost. AC analysis using SPICE is a tool to effectively understand filter behavior.

Whether designing a buck or boost supply, differential mode filters or bidirectional capacitive input filters are quite practical, which avoids EMI noise entering the line and radiating and/or conducting noise. It should be noted that the parasitic components such as the cross-winding terminal capacitance and the capacitor ESR associated with the filter component will significantly affect the attenuation of the harmonics, so it should be used with caution.

Use the right components

Component selection is a key part of designing EMI-compatible switching regulators. For example, the shielded inductance helps to reduce the leakage magnetic field that produces radiation and is coupled into a mutual inductance and high impedance circuit, such as an input error amplifier of a PWM controller.

A diode with soft reverse or low reverse recovery that minimizes diode-related large inrush currents that change from on to off. These peak currents can interact with parasitic capacitances, causing oscillations at switching nodes that exceed 100 MHz and adversely affecting EMC testing. Although not within the scope of this article, it should be noted that improper use of the switching regulator's loop compensation components will increase EMI. If the power supply is not properly compensated, the output ripple and instability can increase the noise. A properly compensated power supply is the key to achieving good noise performance.

Keep in mind the path through which the current passes

It is now necessary to deal with the necessary layers that are most easily controlled by EMI-compatible switching regulators, namely the circuit signal path and component locations. The component position will greatly affect the circuit signal line path. As mentioned earlier, EMI is an unsuitable energy, and varying currents and voltages are coupled to sensitive circuits (such as high impedance) through parasitic capacitance, mutual inductance, or air. Therefore, it has an important effect on minimizing the amount of emission from the source, component position and current path.

In the correct configuration of a power supply, the loop portion of the high current conductor must be minimized. This minimizes the inductance of the antenna source and the transmitted energy. One of the layers is the effective placement of components and the use of decoupling capacitors. Figure 3 shows the output power stage and filter of a synchronous buck converter. C3 decouples the power stage to provide a low impedance source when Q2 starts. In order to minimize the amount of radiated emissions, C3 must be connected as shown, where the inherent impedance of the capacitor, the circuit signal lines, and the interconnection through the inductor are reduced to a minimum. In addition, high quality capacitive dielectrics with high natural frequency such as X7R are also required. 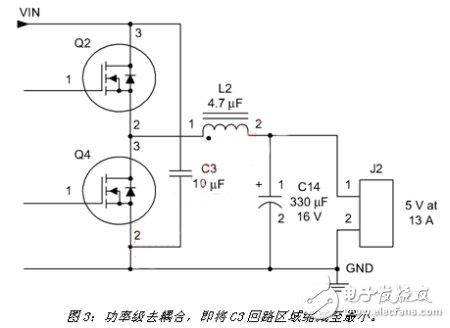 The last few techniques that will be covered in this paper are noise masking and noise spreading, which can be used to improve noise margin after applying the techniques discussed earlier. If the EMC standard is not met or the noise margin is insufficient, an external shield is required to transfer the radiated electric field emission to avoid transmission to the EMC receiver antenna.

When a switching voltage appears on the surface of a heat sink or magnetic core, an electric field is generated. The electric field is usually shielded by a conductive casing, which converts the electric field into a current to isolate the electric field. Of course, there must also be a path for this current (generally grounded). However, the entire conducted noise energy caused by this current needs to be solved with a filter. External magnetic field shielding is more challenging (high cost) and does not work well at higher frequencies. Therefore, the relevant magnetic components and circuit board loop parts should be carefully designed.

Finally, this article explores another technology that is increasingly widely used to spread peak harmonic energy over a larger frequency band to effectively reduce this energy. This technique, known as Spread Spectrum Frequency Jitter (SSFD), changes the noise spectrum by changing the harmonic peak from a narrow frequency to a wide frequency. It is necessary to understand the changes in the energy spectrum while the entire energy remains unchanged. The end result is that noise levels generally increase, damaging the high fidelity system. Figure 4 shows the harmonic spread and peak reduction that occur. Typically the amplitude is reduced by 5 to 10 dB, and subsequent harmonics increase the magnitude of the peak reduction. 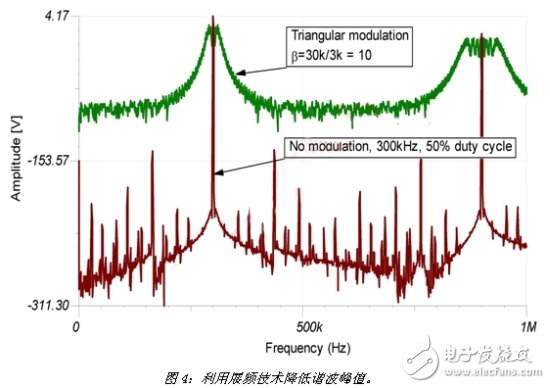