Analysis of the basic concepts of EMC simulation design

As product complexity and density increase and design cycles continue to shrink, it becomes increasingly impractical to address electromagnetic compatibility (EMC) issues later in the design cycle. At higher frequencies, the rules of thumb that you usually use to calculate EMC no longer apply, and you may be able to misuse these rules of thumb. As a result, 70% to 90% of new designs have not passed the first EMC test, which makes the late redesign cost very high. If the manufacturer delays the product delivery date, the lost sales cost will be even greater. To identify and solve problems at a much lower cost, designers should consider adopting collaborative, concept-based EMC simulations early in the design process.

Higher clock rates increase the difficulty of meeting electromagnetic compatibility requirements. In the gigahertz field, an increase in the number of resonances in the enclosure enhances electromagnetic radiation, making apertures and gaps a problem; application-specific integrated circuit (ASIC) heat sinks also increase electromagnetic radiation. In addition, regulatory agencies are developing regulations to ensure compliance at increasingly higher frequencies. Furthermore, when engineers plan to design radiators into their systems, they pose further challenges to the trend of integrated wireless functions such as Wi-Fi, Bluetooth, WiMax, and UWB.

Under normal circumstances, electrical hardware designers and mechanical designers are independent when considering electromagnetic compatibility issues, and do not communicate or communicate with each other at all. They often use rules of thumb during design, and hope that these rules are sufficient to meet the device requirements of their design. Many of these EMC design rules become obsolete when the design reaches a higher frequency and causes failures in the test.

After the design phase, the designer made the prototype and tested it for electromagnetic compatibility. When electromagnetic compatibility is considered too late in the design, this process often has various EMC problems. Expensive repairs to designs are often the only viable option. Design changes often increase by more than an order of magnitude as the design moves from system concept design to specific design to verification. Therefore, a modification to the design will cost only $100 in the conceptual design phase, and it may cost hundreds of thousands of dollars in the testing phase, not to mention the negative impact of the opposite market time.

Typical EMC issues are related to the enclosure, which has a greater impact on EMC than slots, holes, and cables that are important for EMC performance. Accurate modeling requires that the model contain large and small details. This requirement results in a large aspect ratio (the ratio of the largest feature size to the smallest feature size), which in turn requires a fine grid to resolve the finest details. Compression model technology allows you to include structures large and small in your simulation without excessive simulations.

Another challenge is that you must complete the characterization of EMC over a wide frequency range. The time required to calculate an electromagnetic field at each sampling frequency can be prohibitive. A time domain method such as a Transmission Line Method (TLM) can use a wideband excitation to calculate an electromagnetic field in the time domain so that data for the entire frequency band can be derived in one simulation. The space is divided into cells that are modeled at the intersection of orthogonal transmission lines. Voltage pulses are emitted and scattered at each unit. You can calculate the electric and magnetic fields at regular intervals based on the voltage and current on the transmission line.

Three module configurations on a backplane 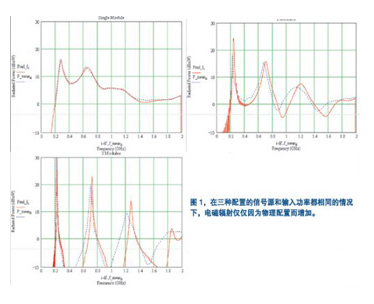 EMC simulation can be used to detect components and subsystems, such as the radiation distribution of the heat sink ground to the frequency characteristics, and can also be used to evaluate grounding techniques, the effects of heat sink shapes, and other factors. In addition, you can compare the size and shape of different vents and the shielding effect of metal thickness. One of the latest applications in this field is to evaluate the use of large-diameter vents for air supply and to achieve shielding by placing two back-to-back spaced panels.

EMC simulation is also suitable for system-level EMC design and optimization to calculate broadband shielding effects, broadband electromagnetic radiation, 3-D far-field radiation patterns, cylindrical near-field electromagnetic radiation used to simulate rotary measurements, and for visualization To help determine the current and electromagnetic field distribution at the EMC hotspot location. Typical system-level EMC applications are: enclosure design to ensure maximum shielding, EMC performance evaluation of component placement within the enclosure, calculation of cable coupling inside and outside the system, and detection of cable radiation effects. EMC simulation also helps identify mechanisms of unwanted electromagnetic waves in the enclosure and subsystems, such as cavity resonance, electromagnetic radiation through holes, slots, seams, and other base openings, conducted radiation through the cable, and Coupling of heat sinks, other components, and parasitic waveguides inherent to optical components, displays, LEDs, and other components mounted on the chassis.

Effect of connector type on EMC

You can use a simple and fast-built case model for design trade-offs in seam configuration. Figure 2 provides an assessment of the radiation produced by the butt joint and the radiation produced by the overlapping shell seams. By comparing the relative shielding levels, engineers can make decisions based on the chassis' EMC budget and the cost of implementing a specific design configuration. The addition of internal components during the simulation process has only a small effect on the simulation time, so the designer can easily perform the joint shielding effect in the real environment that causes the coupling between the slot resonance, the cavity mode and the interaction with the internal structure. Evaluation. The design rules for slot leakage do not apply to the above factors, resulting in costly over design and under design. 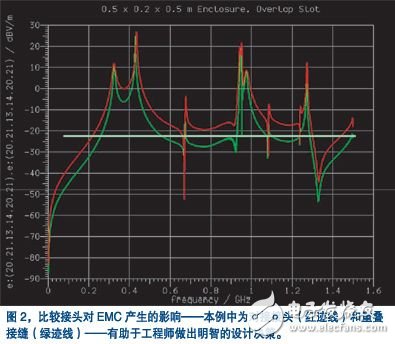 A typical application for EMC simulation is to evaluate the shielding effectiveness of the ventilated panels. Although there are ventilator design rules to prevent EMC leakage, EMC simulation can accurately predict relatively specific structures, such as back-to-back through-hole plates with large holes, waveguide arrays, etc., taking into account temperature and cost constraints. Figure 3 shows the calculation results of the shielding effect of the ventilating plates of different thicknesses having round or square holes. This figure shows the shielding effect of these ventilator thickness (left) and hole shape (right). 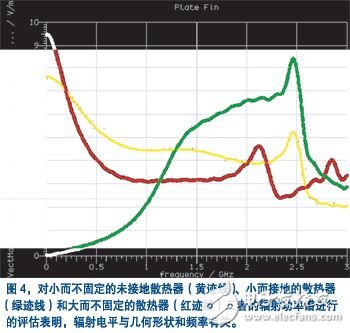 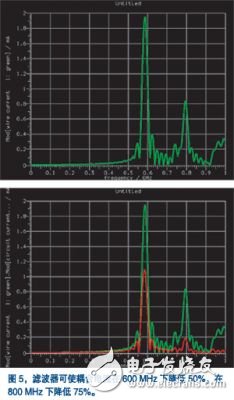 Figure 5 shows the use of EMC simulation to determine system level cable coupling. The geometry of the EMC simulation tool consists of three network hubs in a 19-inch rack. A four-wire ribbon cable connects the printed circuit board in the upper and lower hubs to the intermediate hub. The hub contains the only EMC signal source in the model. The EMC simulation tool calculates the amount of current that is coupled by the intermediate hub to the upper hub printed circuit board connection. The coupled current shows two strong resonances at two frequency points, 600MHz and 800MHz. A common way to solve this type of problem is to enhance the filtering function on the affected cable and then use simulation to determine this effect. The lower curve shows that adding a low-pass filter reduces the magnitude of the coupling current at the resonant frequency, but it does not eliminate it. This is an "emergency" approach because it does not solve the problem at all.

Isolating the integrator with a metal partition

You can use EMC simulation to identify and resolve problems caused by modifications to the design due to temperature rise. An example of this technique built on the controller node (essentially a Pentium dual processor computer) model of an enterprise storage system is an example. After making this design into hardware, some heat pipes were used to replace the original Pentium chip heat sinks. These heat pipes occupy the same area as the heat sink, but the height is higher, and the heat sink used is horizontal rather than vertical.

A broadband simulation tool calculates the electromagnetic radiation of the system (Figure 7). In this example, the engineer was interested in isolating the radiation caused by a 120 MHz oscillating signal in the system because the measurement indicated a problem. Therefore, after calculating the wideband response, the engineer uses indirect excitation in the post processing to extract the response to the desired source signal, resulting in discrete harmonics in the graph. This radiation is increased by about 40 dB at the main harmonic frequency of the 120 MHz oscillation frequency. Obviously, such a heat design modification that does not produce harmful effects can have such a large and scary impact on system EMC compliance.

Once you've discovered the root cause of the problem, you can explore an affordable solution. In this case, connecting a ground wire between the top of the heat pipe and the cover to eliminate the capacitive coupling path is an excellent method for low cost. Specifically, a small piece of anti-electromagnetic interference pad coated with conductive adhesive is attached to the heat sink on the top of the heat pipe, so that the contact with the top cover of the casing will squeeze the gasket to form a grounding wire. Figure 8 shows an electromagnetic radiation pattern including the results of the heat pipe being grounded. This method makes the radiation virtually identical to the original situation, thereby improving the thermal performance without adversely affecting the radiation.

EMC simulations are used early in the design process to study and predict critical EMC phenomena before manufacturing prototypes to optimize electronic product design in terms of meeting EMC requirements and improving shielding effectiveness. Modern simulation tools allow designers to evaluate more designs and achieve unprecedented levels of performance than prototyping prototypes and optimizing products from EMC. In addition, it is worth noting that you can't do EMC design in isolation, because design changes due to EMC often affect other design issues, such as thermal management. Therefore, it makes sense that EMC simulation tools allow designers to consider EMC and other important design constraints to optimize total system cost and system performance.