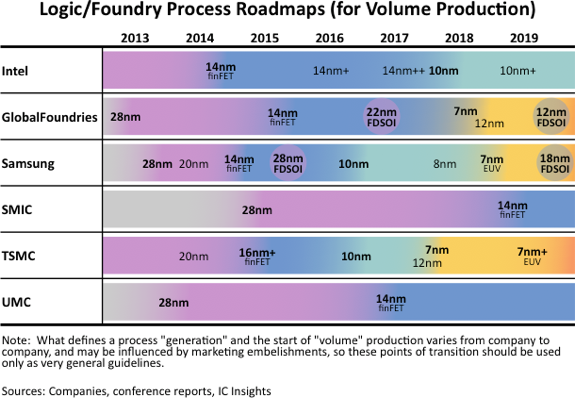 TSMC - TSMC's 10nm finFET process was put into mass production at the end of 2016, but it has rapidly grown from 10 nanometers to 7 nanometers. TSMC believes that 7nm products will become long-lived nodes such as 28nm and 16nm.

At present, TSMC's 5nm process is under development and is expected to enter the risk production phase in the first half of 2019 and mass production will begin in 2020. The process will use EUV, but it will not be the first process for TSMC to take advantage of EUV technology. The first is an improved version of the company's 7nm technology. The N7 + process uses EUV only on the critical layer (four layers), while the N5 process will use EUV extensively (up to 14 layers). N7+ is scheduled to be put into mass production in the second quarter of 2019.

Samsung's 7nm technology was put into risk production in October 2018. The company no longer offers a 7nm process using immersion lithography, but instead decided to use the EUV-based 7nm process directly. The company is using EUV for 8-10 layers of 7nm.

GlobalFoundries - Gexin considers its 22nm FD-SOI process as its main market and complements its 14nm finFET technology. The company claims that the performance of the 22FDX platform is very close to that of the finFET, but the manufacturing cost is the same as the 28nm technology.