Electrostatic coupling and interference occur when a charged object approaches the input of the circuit under test. At low impedance, the effect of interference is not significant due to the rapid dissipation of charge. However, high-resistance materials do not allow rapid decay of charge, which can result in unstable measurements. Since erroneous readings can be caused by DC or AC electrostatic fields, electrostatic shielding helps to minimize the effects of this electric field.

DC electric fields can produce noisy readings or undetectable errors. Movements near the experimental circuit (eg, movement of the operating instrument personnel or other movements in adjacent areas, etc.) cause the electrometer to show fluctuations in readings, reflecting the presence of such a field. To quickly check for the presence of interference, place a charged plastic object, such as a comb, near the circuit. A large change in the meter's readings indicates that the shielding is not perfect.

AC electric fields can also cause trouble. The alternating electric field is often caused by the power supply and the RF field. If the AC voltage at the input is large, a part of the signal is rectified, and an error is generated in the DC signal to be measured. You can check this by observing the analog output of an electrometer or picoammeter with an oscilloscope. The clipped waveform indicates the need to improve electrostatic shielding. Figure 2-42 shows the clipping waveform observed at the 2V analog output of the electrometer. In this example, the limiting effect reduces the DC reading by approximately 50%.

For SMU, an oscilloscope can be connected between its protected and common terminals to observe AC interference. 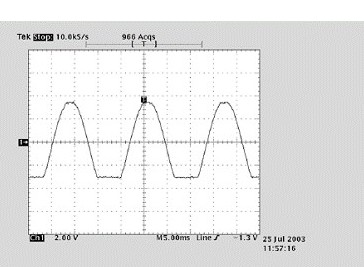 For example, two conductors having an area of 1 cm 2 and 1 cm apart in air have a capacitance of about 0.1 pF. If the voltage difference between the two conductors is 100V, the change in capacitance due to vibration is 0.01pF/sec (10% capacitance change), and an AC current of 1pA can be generated.

Figure 2 is an example of a shield. Shields made of conductive material are always connected to the low impedance input of the electrometer or picoammeter or to the LO output (or common) of the SMU. If the LO end of the circuit is floating to the ground, special safety measures should be taken to prevent personnel from touching the shield.

The cable between the HI terminal of the meter and the device under test also needs to be shielded. By enclosing the signal conductor with a metal shield connected to the LO terminal, the capacitive coupling between the electrostatic noise source and the signal conductor or cable can be greatly reduced, as shown in Figure 3. With this shielding, the noise current generated by the electrostatic voltage source and the coupling capacitor flows through the shield to the ground without flowing through the signal line.

In general, the following guidelines can be used to minimize the current generated by electrostatic coupling:

* Keep all live objects (including people) and conductors away from sensitive areas of the test circuit.

* Avoid movement and vibration near the test area.

* When the measured current is less than 1nA, shield the device under test with a metal closure and connect the closure to the common end of the test circuit.