How to reduce electromagnetic interference in automotive application analog devices

The designer then selects the front-end analog device that meets the total error budget based on the above characteristics. However, there is a frequently overlooked problem in such applications, namely high frequency interference caused by external signals, also known as "electromagnetic interference (EMI)." EMI can occur in a variety of ways, primarily by the final application. For example, an instrumentation amplifier may be used in a control board that interfaces with a DC motor, and the current loop of the motor contains power leads, brushes, commutators, and coils, which typically emit high-frequency signals like an antenna, and may A small voltage that interferes with the input of the instrumentation amplifier.

Another example is current sensing in automotive solenoid valve control. Solenoid valves are powered by the vehicle's battery through long wires that act like antennas. A series shunt resistor is connected to the wire path, and then the voltage across the resistor is measured by a current sense amplifier. A high frequency common mode signal may be present in the line, and the input of the amplifier is susceptible to such external signals. Once it is affected by external high-frequency interference, it may cause the accuracy of the analog device to drop, and may even be unable to control the solenoid valve circuit. This state of performance in the amplifier is that the amplifier output accuracy exceeds the error budget and the tolerances in the data sheet, and in some cases the limit may be reached, causing the control loop to turn off.

How does EMI cause a large DC offset? This may be the case: Many instrumentation amplifiers are designed to exhibit excellent common mode rejection over a frequency range of up to tens of kilohertz. However, when an unshielded amplifier is exposed to tens or hundreds of "megahertz" of RF radiation, problems can occur. At this point, the input stage of the amplifier may be asymmetrical rectified, resulting in a dc offset. After further amplification, it will be very noticeable, plus the gain of the amplifier, even reaching the upper limit of its output or part of the external circuit.

This example will detail a typical high-side current sensing application. Figure 1 shows a common configuration for monitoring solenoid valves or other inductive loads in automotive applications.

We studied the effects of high frequency interference using two current sense amplifier configurations with similar designs. The functions and pinouts of the two devices are identical; however, one has an internal EMI filter circuit and the other does not.

Figure 2 shows the deviation of the DC output of the current sensor from its ideal value as the input changes over a wide frequency range. It can be seen from the figure that the deviation is most significant ("0.1 V" in the frequency range of 1 MHz to 20 MHz, and the DC error reaches the maximum value (1 V) at 3 MHz, which is 0 V to 5 V in the amplifier. A large proportion of the output voltage range is occupied.

Figure 3 shows the results of the same experiment and configuration when using another pin-compatible current sensor with the same circuit architecture and similar DC specifications as the previous example, but with built-in input EMI filter circuitry. Note that the voltage range has been expanded by a factor of 20. 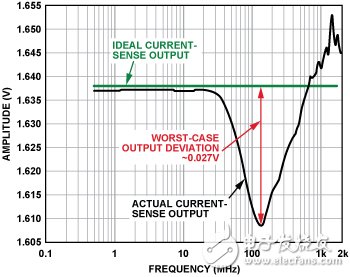 In this case, the error is only about 3 mV at 40 MHz, and the peak error (greater than 100 MHz) is less than 30 mV, and the performance is improved by 35 times. This clearly shows that the built-in EMI filter circuit helps to significantly improve the current sensor protection from the high frequency signals present at the input. In practical applications, although the severity of EMI is not known, if a current sensor with built-in EMI filtering is used, the control loop will actually remain within its tolerance.

Both devices are tested under exactly the same conditions. The only difference is that the AD8208 (see “Appendix”) has an internal low-pass RF input filter on both the input and power pins. Adding such a component to the chip seems trivial, but since the application is typically controlled by PWM, the current sense amplifier must be able to withstand a continuous switching common-mode voltage of up to 45 V. Therefore, to maintain accurate high gain and common mode rejection, the input filter must be closely matched.

Why and how to ensure EMI compatibility during design and testing

Automotive applications are particularly sensitive to EMI events, which are unavoidable in noisy electrical environments consisting of central batteries, bundled harnesses, various inductive loads, antennas, and external disturbances associated with automobiles. Since various key functions such as airbag configuration, cruise control, brakes, and suspension are involved in electronic equipment, EMI compatibility must be ensured, and false alarms or false triggers due to external interference are never allowed. Earlier, the EMI compatibility test was the last test in automotive applications. If something goes wrong, the designer must find a solution between the hass, which often involves changing the board layout, adding additional filters, or even replacing the device.

This uncertainty greatly increases the cost of design and creates a lot of trouble for engineers. The automotive industry has been taking practical steps to improve EMI compatibility. Because equipment must meet EMI standards, automotive OEMs now require semiconductor manufacturers (such as Analog Devices) to perform EMI testing at the device level before considering the devices they manufacture. Now, this process has become popular, and all IC manufacturers use standard specifications to test device EMI compatibility.

For standard EMI testing requirements for all types of integrated circuits, please obtain the relevant documentation from the International Electrotechnical Commission (IEC). EMI and EMC can be found in documents such as IEC 62132 and IEC 61967, which describe in great detail how to test specific integrated circuits using industry-accepted standards. The above various tests are based on these guidelines.

Specifically, these tests are done using a "direct power injection method," a method of coupling an RF signal to a specific device pin through a capacitor. Depending on the type of IC to be tested, each input to the device is tested for different RF signal power levels and frequency ranges. Figure 4 shows a schematic diagram of the principle of performing a direct power injection test on a particular pin.

These standards contain a wealth of information necessary on circuit configuration, layout methods, and monitoring techniques to help you understand the success of your device test. A more complete schematic of the IEC standard is shown in Figure 5. 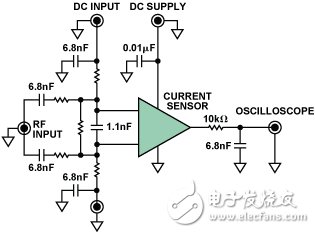 The EMI compatibility of integrated circuits is the key to the success of electronic design. This article only describes whether the amplifier has a built-in EMI filter and introduces two very similar amplifiers. When performing DC measurements, there is a significant difference in DC performance in an RF environment. In automotive applications, EMI is a very important aspect when considering safety and reliability. Today, IC manufacturers, such as Analog Devices, are increasingly focusing on EMI tolerance considerations when designing and testing devices for critical applications. The IEC standard describes the relevant guidelines in great detail. For the automotive application market, current sensing devices such as the AD8207, AD8208, and AD8209 have passed EMI testing. New devices such as the Li-Ion Battery Safety Monitor AD8280 and the Digital Programmable Sensor Signal Amplifier AD8556 have been specifically designed and tested to meet EMI-related requirements.