How is the EMI signal generated?

Electromagnetic interference (EMI) has become a part of our lives. Do you want to deal with it? Many people believe that the widespread use of electronic solutions is a good thing because it brings comfort and safety to our lives and brings medical services to us. However, these solutions also produce EMI signals with electronic hazards.

The source of EMI signals is varied. These sources include some of the electronic devices that are common to us. Cars, trucks, and heavy vehicles are themselves generators of EMI signals. The problem is that these EMI sources are in the same location as the sensitive electronic circuits - inside the vehicle. This close proximity affects audio equipment, automatic door controllers, and other devices. Such EMI noise present in vehicles is foreseeable.

But what about the mobile phones that people in our 21st century use all the time? Every electronic device has its advantages and disadvantages. Today, the use of mobile phones allows us to easily connect with friends, family and business partners from anywhere. However, mobile phones also generate EMI signals, and this is only the beginning of the problem. The development of mobile phones has surpassed its basic phone functions and has more smart phone functions. This EMI noise is completely unpredictable for interference with surrounding equipment and circuitry. Mobile phones rely on high RF energy to work. Even if the regulations are met, the phone may become an unintentional source of EMI that interferes with the work of sensitive surrounding equipment.

Printed circuit boards, clock circuits, oscillators, digital circuits, and processors also become internal EMI sources. Some electromechanical devices that perform switching operations on currents generate EMI during critical operations. These EMI signals do not necessarily have a negative impact on other electronic devices. The spectral composition and intensity of the EMI signal determines whether it will have an unexpected effect on sensitive circuits.

You can simplify the spectral components of a digital signal to its frequency and rise time. The clock or system frequency establishes the time reference of the circuit, but its edge rate forms interference harmonics. Figure 1 shows the spectral components of a 10 MHz square wave. The 10 MHz signal has an edge rate of 10 ns. Note that the magnitude of these harmonics in Figure 1 decreases with frequency. In general, the potential EMI of this signal is:

The equation for the 10 ns edge rate results in approximately 31.8 MHz. The graph shows that the last significant harmonic appeared at 30 MHz. At the same time, the equation at 1 ns edge rate shown in Figure 2 results in a maximum frequency of 318 MHz. If your circuit is susceptible to frequencies generated in the 318 MHz band, EMI harmonics can cause interference in your circuit. 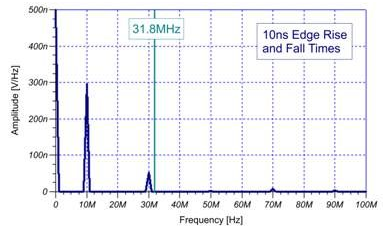 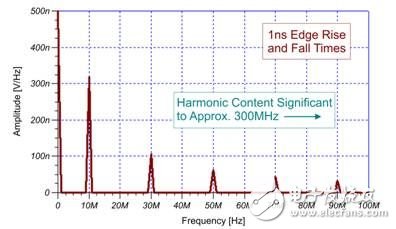 In fact, it is better to eliminate the interfering signal at its source without letting it pass through your circuit. As far as vehicles are concerned, more and more components are made of plastic. However, this is a problem when you want to find a low impedance ground or implement signal shielding. Once the signals are “free”, they “wander around” and enter your sensitive system, which can cause serious damage.