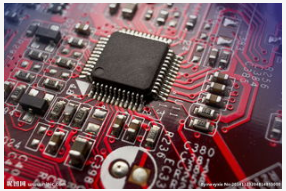 The use of equal traces can reduce the inductance of the wire, but the mutual inductance and distributed capacitance between the wires increase. If the layout allows, it is better to use a well-shaped mesh wiring structure. The specific method is that one side of the printed board is laterally routed, and the other side is longitudinally routed. Metallized holes are then connected at the intersection holes.

3. In order to avoid the electromagnetic radiation generated when the high-frequency signal passes through the printed wiring, the following points should be noted when wiring the printed circuit board:

(2) The clock signal lead is most likely to cause electromagnetic radiation interference. When routing, it should be close to the ground loop, and the driver should be next to the connector.

(3) The bus driver should be close to the bus it is intended to drive. For leads that leave the printed circuit board, the drive should be next to the connector.

(4) The wiring of the data bus should sandwich a signal ground between every two signal lines. It is best to place the loop in close proximity to the least important address lead because the latter often carries high frequency current.

(5) In order to suppress the crosstalk between the printed circuit board wires, the long distance equalization should be avoided when designing the wiring, and the distance between the wires and the wires should be as far as possible. The signal wires and ground wires and power wires should be as far as possible. Do not cross. A grounded trace is placed between some signal lines that are very sensitive to interference, which effectively suppresses crosstalk.

In order to suppress the reflection interference that occurs at the end of the printed line, in addition to special needs, the length of the printed line should be shortened as much as possible and a slow circuit should be used. Terminal matching can be added if necessary, that is, a matching resistor of the same resistance value is added to the ground and the power supply end at the end of the transmission line. According to experience, for the TTL circuit with faster speed, the terminal matching method should be adopted when the printed line is longer than 10cm. The resistance of the matching resistor should be determined according to the output drive current of the integrated circuit and the maximum value of the sink current.

5. Differential signal line routing strategy is adopted in the circuit board design process