Conduction: Conductive coupling is the coupling of disturbances on one electrical network to another via a conductive medium, which is part of the lower frequency (below 30 MHz). Conductive coupling in our products typically includes power lines, signal lines, interconnects, ground conductors, and the like.

Radiation: The coupling of disturbances on one electrical network to another via a space, which is a higher frequency part (above 30 MHz). The path of radiation is transmitted through space, and the radiation interference introduced and generated in our circuits is mainly the antenna effect formed by various wires.

Common impedance coupling: Mutual interference that occurs when currents of two or more different circuits flow through a common impedance. The disturbance current conducted on the power line and the ground conductor is mostly introduced into the sensitive circuit in this way.

Inductive coupling: Through the principle of mutual inductance, the electrical signal transmitted in one loop is induced to interfere with another loop. Divided into electric induction and magnetic induction.

For the R&D design process of a new project, the EMC design needs to run through the whole process. In the design, considering the design of electromagnetic compatibility, it will not be reworked, avoiding repeated research and development, which can shorten the time-to-market of the whole product and improve the efficiency of the enterprise.

In the demand analysis stage, product market analysis, on-site investigation, mining of useful information for the project, integration of project development prospects, detailed work environment of the project product, site inspection of installation location, whether there is limited space for installation, and whether the working environment is special, Is there corrosion, humidity, high temperature, etc., the working condition of the surrounding equipment, whether there is a bad electromagnetic environment, whether it is limited with other equipment, whether the successful development of the product can greatly improve the production efficiency, or whether it can give people a living or working environment. It brings great convenience, and the operation and use method can be easily accepted by people. This requires the project product to meet the needs of the field function, easy to operate, etc. Finally, the detailed demand analysis report should be compiled for the needs review.

After reviewing the relevant internal responsible persons, the requirements analysis report is completed, and then the project is established. The project project needs to set up a project team, and arrange software, hardware, structure, test and other personnel into the project team to assign their respective responsibilities. The next stage of project development is the project outline design, which breaks down the project into multiple functional modules, uses the WBS decomposition structure to decompose the project, and arranges the time according to the workload to arrange specific personnel. Organize the project summary design report, evaluate the project as a whole, determine the power type, power distribution, power isolation filter, system grounding, product shielding, product structure using shield design, shielded chassis, analysis signal type, Thunder, static electricity, group pulse and other interferences take protective measures.

After the product summary design report comes out, it must be reviewed by relevant personnel, whether the implementation method is reasonable, and whether the implementation plan is feasible. The review report is given by the reviewer. The project team and the review report modify the summary design and enter the detailed design stage of the product. The content of the stage includes schematic design, PCB design, PCB procurement and soldering, software writing, function debugging and other processes. The schematic design should take into account the influence of electromagnetic compatibility, increase the filter capacitance to the board-level power supply, and increase the interface part of the signal. The filter circuit selects a suitable filter circuit according to the signal type. If the signal is a low frequency model, the low pass filter circuit should be selected to calculate the appropriate cutoff frequency and select the corresponding resistor and capacitor. In addition, a large current bleeder circuit is designed for the interface part, and a lightning protection device is provided to achieve the third level of lightning protection.

Passive devices usually include resistors, capacitors, inductors, etc. in our applications. For the selection of passive components, we must pay attention to the frequency characteristics and distribution parameters of these components.

Second, the printed board design

When designing the printed board, the influence of the interference on the system should be taken into consideration. The analog part of the circuit and the circuit of the digital part should be strictly separated. The core circuit should be protected, the system ground should be surrounded, and the wiring should be as thick as possible. DC-DC isolation, signal isolation, design of isolated power supply, analysis of parts that are prone to interference (such as clock circuits, communication circuits, etc.) and parts that are easily interfered (such as analog sampling circuits, etc.) The circuit takes separate measures. Inhibition measures are taken for the interference components, isolation and protection measures are taken for the sensitive components, and they are spatially and electrically separated. When designing at the board level, it is also important to note that the components are placed away from the edge of the printed board, which is advantageous for shielding against air discharge.

See Figure 1 for the schematic design of the sampling circuit: 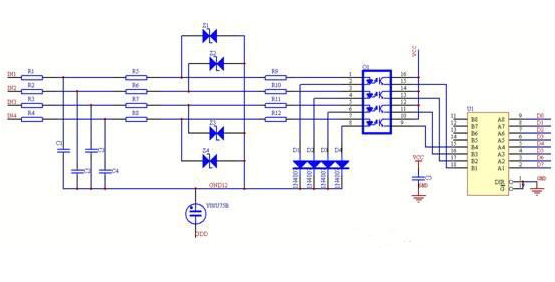 The reasonable layout of the circuit can reduce interference and improve electromagnetic compatibility. According to the function of the circuit, several functional modules are divided, and the interference source and sensitive signal of each module are analyzed for special processing.

When printing printed circuit boards, you need to pay attention to the following aspects:

1. Keep the loop area to a minimum, such as the loop formed between the power supply and the ground, reduce the loop area, and reduce the induced current of electromagnetic interference on the loop. The power line is as close as possible to the ground line to reduce the difference. The ring area of ​​the mode radiation reduces the influence of interference on the system and improves the anti-jamming performance of the system. The parallel wires are placed tightly together, and a thick wire is used for connection. The signal line is close to the ground plane to reduce interference. Add high frequency filter capacitors between the power supply and ground.

2. Make the length of the wire as short as possible, reduce the area of ​​the printed board, and reduce the interference on the wire.

3, using a complete ground plane design, the use of multi-layer board design, laying the ground layer, easy to interfere with signal release.

4. Keep the electronic components away from planes that may discharge, such as chassis panels, handles, screws, etc., to keep the casing in good contact with the ground, providing a good venting channel for interference. Handling sensitive signals to reduce interference.

5, try to use the chip components, the chip device is much better than the electromagnetic compatibility of the in-line device.

6. Ground the analog ground and the digital ground at the connection between the PCB and the outside world.

8, the printed circuit board width should not be abrupt, the corner should be rounded, not right angle or sharp corner.

9. The clock line and signal line should also be as close as possible to the ground line, and the trace should not be too long to reduce the loop area of ​​the loop.

2. The shielded power cable is used for the main power inlet, and the magnetic ring is added. The shield is grounded 360 degrees into the cabinet.

3. Use shielded wires for the external signal lines of the system, and the ground at the entrance of the shielded cabinet is well grounded.

4. The equipment casing is close to the cabinet to avoid crossover.

5. The system sets the isolation transformer and ups to ensure that the system supplies pure power.

6. Strictly separate the power cable and the signal cable. The surface of the device should be in good contact with each panel and the panel. The contact resistance should be less than 0.4 ohms. The smaller the better, the better the device casing is connected to the earth. When the static electricity is released, it will not affect the normal operation of the system.

1, the concept of ground wire

Protective grounding provides a low impedance path for the product's fault current to enter the earth;

Reference Ground Provides a reference level for stable and reliable operation of the product, providing a reference potential for the power supply and signal.

The safety grounding is to provide a bleed circuit for high current and high voltage when some electrical anomalies occur, mainly as a protection measure for the circuit. The reference ground is mainly the signal ground and the power ground, which is the basis for ensuring the function of the circuit.

Suspension grounding is generally not a problem for a system that has no external interface to the outside, but if the system has interfaces such as communication ports and sampling lines with other systems, the floating ground is susceptible to static electricity and lightning strikes. Impact, so most of the general electronic products do not use floating grounding.

Series single-point grounding of multi-stage circuits: Ground the circuits of similar characteristics to form a common point, and then connect each common point to a single point.

Single-point grounding circuits are connected at the same point, providing a common potential reference point, without common impedance coupling and low frequency ground loops, but with large ground impedance for high frequency signals. Multi-point grounding is grounded nearby, and each ground wire can be short and provides a lower ground impedance. 1MHz~10MHz can choose which grounding method to use according to actual needs.

If the electromagnetic compatibility related design is adopted in the detailed design stage of the product, it is not necessary to worry too much about the electrostatic test. By design, the charge accumulated by the static electricity is well discharged, and the normal operation of the system is not affected.

Adding a magnetic ring to both ends of the power line, signal line, and communication line can protect the group pulse interference.

Signal lightning protection is to protect the signal path of the system. It mainly involves the board level design. In the board level design, lightning protection devices, such as gas discharge tubes, are added to increase the TVS bleeder circuit. When there is a large current, the matching resistor and TVS and gas discharge tubes are vented to protect the rear stage circuit. Then the signal is photoelectrically isolated and then enters the system. The system can collect a stable signal, so that the system can analyze and judge normally, and the command is issued normally and works normally. On the other hand, the signal range is designed to be wide, and the system works normally when the signal fluctuates normally.

The RF test is to interfere with the signal line and power supply in the frequency range of 0.15k~80M, and the intensity of the third level is 10V/m.

The principle of radiation protection is to shield the power supply and signal lines, and the shielding layer is well grounded. Select the appropriate frequency for filtering and filter the interference.

This test is mainly to test the system's anti-RF signal and overall shielding performance. As long as the system is well shielded, the system ground is well grounded and the system can pass the test.

Through the relevant electromagnetic compatibility test, the product can be put on the market, the test run is carried out, and the problems occurring in the trial run are summarized for the improvement of the product.

The electronic products meet the relevant electromagnetic compatibility test standards, and can be pushed to the market through testing, so that users can use them with confidence, greatly reducing accidents caused by electromagnetic interference, and playing a positive role in the efficiency of enterprises and the promotion of products.