Images in sci-fi movies often break through the limits of reality, such as the movie Minority Report. Tom Cruise uses a multi-touch screen to view information. Capacitive sensing technology changes the way we interact with devices. We no longer use simple buttons or switches. We can touch, slide or scale the data itself on the touch screen to interact with it. The seemingly distant interface in sci-fi movies is no longer illusory. In fact, they already exist and are designed into a variety of applications, including cars.

The core of a multi-touch system is capacitive sensing consisting of a pair of adjacent electrodes. When a conductor, such as a finger, approaches the electrodes, the capacitance between the two electrodes increases (see Figure 1) and can be detected by the microcontroller. In addition, capacitive sensing can also be used for proximity sensing, where the sensor and the user's body do not need to be touched. This can be achieved by increasing the sensitivity of the sensor. 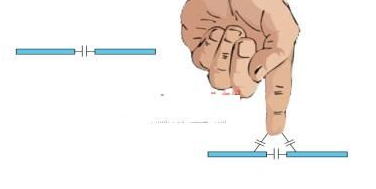 The touch screen allows the user to "touch" the device's application functions directly, thereby reducing the reliance on external buttons. Similarly, on the trackpad, users can also interact with the system using instinct actions such as touch, tap, zoom, and drag. There are three main types of touch screens: single touch, multi-touch recognition gestures, and multi-touch recognition positions (see Figure 3).

The single touch touch screen is mainly a resistive touch screen that positions the screen and buttons in the same area. The limitation of the resistive single-point touch screen is that only one finger on the screen can be detected at a time, the gesture recognition ability is limited, the sensor is easy to wear, and the performance is poor.

These limitations have led to the development of projected capacitive technology, which is based on the principle of multi-touch gestures. Multi-touch gestures Touch screens do not rely on stress to detect user interaction. They are also able to support simultaneous multi-touch gesture recognition and tracking for easy machine screens and web browsing.

Multi-point contact recognition position refers to a touch-sensitive surface (trackpad/touch screen) capable of simultaneously identifying two or more points on the contact surface. The user has ten fingers in his hands and the number increases when there are multiple passengers in the car. Music browsing, map manipulation, electronic control of the body such as seat position are examples of automotive applications, which are good applications for touch screens.

The trackpad on the car facilitates the driver's operating system, such as the navigation and audio subsystems, without having to reach the center console. The trackpad recognizes characters and no longer requires alphanumeric keys.

The touch screen covers glass and plastic, and the bottom is two transparent conductors such as indium tin oxide (ITO), which are separated by an insulating material (see Figure 4). The ITO layer format forms a capacitor grid. The ITO layer is extremely transparent, helping the touch screen to be brighter and easier to read. The screen is more durable because no pressure is required to detect the touch.

In the trackpad, there is a similar capacitive sensor structure, except that the system has an opaque protective layer, and the simple copper layer is the sensor.

Scanning the touch screen sensor detects any change in sensor capacitance and detects a finger touch. Analyzing these data can identify gestures, finger ranges, and finger movement directions. The system can also drive an output device such as an LED or control the motor.

Capacitive touch screens and track versions that support ten fingers are increasingly used in automobiles and are used as a comprehensive interface by a variety of automotive systems. The multi-touch recognition position sensing system also allows multiple users in the vehicle to simultaneously access the touch screen. In addition, automotive network protocols such as CAN/LIN can integrate distributed electromechanical systems to the central console. This allows the human interface designer to coordinate the operation of each subsystem in the console, create a human-machine interface with a unified style user interface, and increase flexibility, while developers can have more design space in terms of appearance and feel. .

Multi-touch recognition position sensing creates an intuitive, aesthetic display interface that is more competitive. As the size increases and processing power increases, touch screens and trackpads become more and more popular, and they eventually become the choice of automotive interfaces.