Non-dispersive infrared (NDIR) spectrometers are often used to detect gases and measure the concentration of carbon oxides such as carbon monoxide and carbon dioxide. An infrared beam passes through the sampling chamber, and each gas component in the sample absorbs infrared light of a specific frequency. The concentration of the gas component can be determined by measuring the amount of infrared absorption at the corresponding frequency. The reason why this technique is non-dispersive is because the wavelength through the sampling cavity is not pre-filtered; instead, the optical filter is placed in front of the detector to filter out all rays outside the wavelength that the selected gas molecules can absorb. .

The circuit shown in Figure 1 is a complete circuit of a thermopile gas sensor based on the NDIR principle. The circuit is optimized for carbon dioxide detection, but the thermopile with different filters can also accurately measure the concentration of multiple gases.

The printed circuit board (PCB) is sized with the Arduino expansion board and interfaces with the Arduino compatible platform board EVAL-ADICUP360. Signal Tuning Reasons The low noise amplifiers AD8629 and ADA4528-1 and the precision analog microcontroller ADuCM360 integrate a programmable gain amplifier, dual 24-bit Σ-Δ analog-to-digital converter (ADC) and ARM Cortex-M3 processor.

Thermopile sensors consist of a large number of thermocouples that are typically connected in series (or occasionally in parallel). The output voltage of the series thermocouple depends on the temperature difference between the thermocouple junction and the reference junction. This principle is called the Seebeck effect and is named after its discoverer Thomas Johann Seebeck.

This circuit uses the AD8629 op amp to amplify the thermopile sensor output signal. Thermopile output voltages are relatively small (from a few hundred microvolts to a few millivolts), requiring high gain and very low offset and drift to avoid DC errors. The high internal resistance of the thermopile (typically 84 kΩ) requires an amplifier with low input bias current to minimize errors, while the AD8629 has a bias current of only 30 pA (typ). The device drifts very slowly with time and temperature and does not introduce additional errors after the calibration temperature is measured. A pulsed source that is synchronized with the ADC sampling rate minimizes errors caused by low frequency drift and flicker noise. 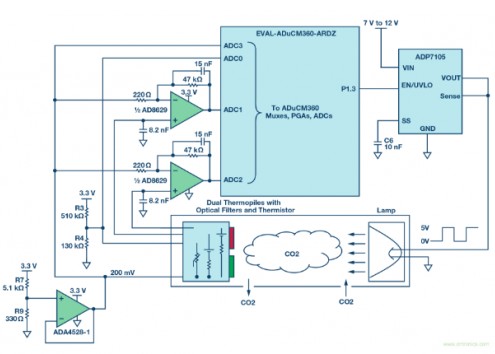 The low-noise amplifier ADA4528-1 is used as a buffered sensor with a common-mode voltage of 200mV, so the NTC and thermopile signal outputs meet the ADuCM360 buffered mode input requirements: ADuCM360 ADC buffer mode input is AGND + 0.1 V to approximately AVDD - 0.1 V. CN-0338 The Arduino expansion board is compatible with other types of Arduino compatible platforms with single-ended input ADCs.

The circuit's chopping frequency range is from 0.1 Hz to 5 Hz and is software selectable. Low Dropout Regulator The ADP7105 l generates a stable 5 V output voltage to drive the IR source and is controlled by the ADuCM360. The ADP7105 features a soft-start feature that eliminates inrush currents generated by cold-start sources.

The ADuCM360 integrates a dual-channel, 24-bit, Σ-Δ ADC that simultaneously samples dual thermopile cells over a programmable rate range of 3.5 Hz to 3.906 kHz. The data sampling rate range of the NDIR system is limited to between 3.5 Hz and 483 Hz for optimum noise performance.

In order to understand the thermopile, it is necessary to review the basic theory of thermocouples.

However, it is difficult to measure the voltage generated by the thermocouple. Assume that the voltmeter is connected to the first thermocouple measurement circuit (see Figure 2 for the actual thermocouple voltage measurement of the cold junction). The wires connected to the voltmeter form more thermocouples at the junction. If these additional junction temperatures are the same (regardless of temperature), the intermediate metal rule indicates that they have no net contribution to the total EMF of the system. If their temperatures are different, an error occurs. Thermoelectric EMF is produced for each pair of different contact metals – including copper/solder joints, kovar/copper sheets (can be an alloy for IC lead frames) and aluminum/corinable (welding in ICs) ) - In practical circuits, the problem is more complicated, and it is necessary to be extremely careful to ensure that all junction pairs of the thermocouple peripheral circuit (except the measurement node and the reference node itself) have the same temperature.

In NDIR applications, filtered pulsed infrared light is applied to the series active nodes; therefore, the junctions heat up, producing a smaller thermoelectric voltage. The temperature of the reference junction is measured by the thermistor.

The positive or negative charge center transients or steady states of many gases do not coincide. In the infrared spectrum, gases can absorb specific frequencies, which can be used for gas analysis. When infrared radiation is injected into the gas, and when the self-resonant frequency of the molecule matches the infrared wavelength, the gas molecules will resonate with the incident infrared light according to the energy level transition of the atom.

For most infrared gas detection applications, the composition of the target gas is known and therefore does not require gas chromatographic analysis. However, if the absorption lines of different gases overlap, the system must deal with the mutual interference between these gases. 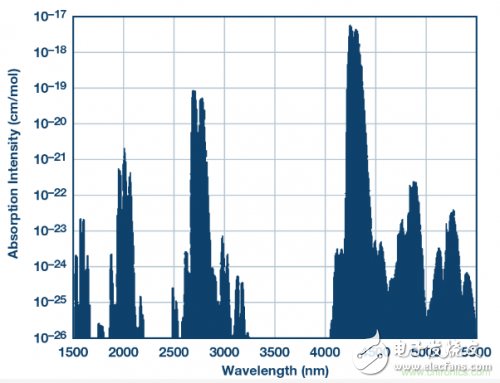 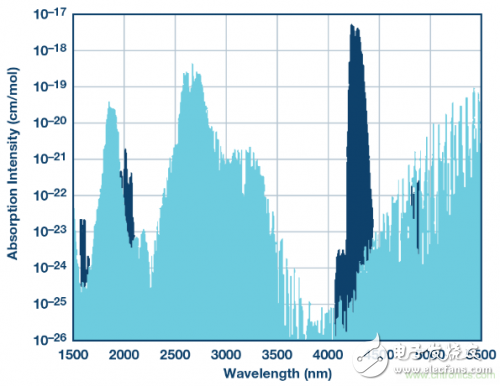 Figure 5. The absorption spectrum of carbon dioxide and water overlaps

The thermopile used in the NDIR test has a relatively high internal resistance, and 50 Hz/60 Hz power line noise is coupled into the signal path. The internal resistance of the thermopile may be around 100 kΩ, causing thermal noise to become the dominant noise in the system. For example, the thermopile sensor voltage noise density selected in the system of Figure 1 is 37 nV/√Hz. In order for the system to have the best performance, the sensor should be output with as large a signal as possible and a lower gain in the circuit.