LEDs are sensitive semiconductor devices with negative temperature characteristics, so they need to be stable and protected in the application process, which leads to the concept of driving. The requirements of LED devices for driving power are almost harsh. Unlike ordinary incandescent light bulbs, LEDs can be directly connected to 220V AC mains. LED is a low-voltage drive of about 3 volts. Complex conversion circuits must be designed. Different uses of LED lights must be equipped with different power adapters. In the international market, foreign customers have very high requirements for the efficiency conversion, effective power, constant current accuracy, power supply life, and electromagnetic compatibility of LED driving power supplies. When designing a good power supply, these factors must be comprehensively considered because the power supply is in the entire lamp. Is as important as the human heart. 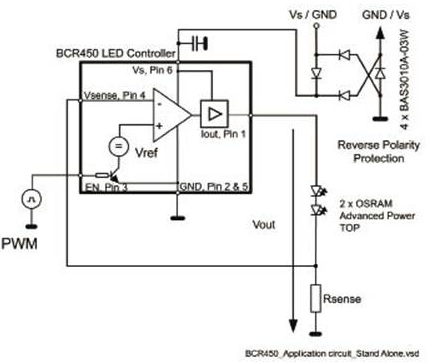 Due to the limitation of LED power level, it is usually necessary to drive multiple LEDs at the same time to meet brightness requirements. Therefore, a special driving circuit is required to light the LEDs.

The impedance of the capacitor under AC is used to limit the input current to obtain a DC level to power the LED. This drive method has a simple structure and low cost, but there is a potential safety hazard in entering a non-isolated solution. And the conversion efficiency is very low, and constant current control cannot be achieved.

Utilizing a flyback circuit, a DC level is generated on the secondary side through a transformer, and this level ripple is fed back to the primary side through an optocoupler, thereby self-exciting and stable. This type of circuit meets the safety certification requirements, and the output constant current accuracy is better, and the conversion efficiency is higher. However, due to the need for an optocoupler and a secondary-side constant current control circuit, the system is complicated, bulky, and expensive. It has gradually been replaced by the original plan.

Power factor is the load requirement of the grid. Generally, there are no mandatory indicators for electrical appliances below 70 watts. Although the lower power factor of a single power consumer has a smaller impact on the power grid, everyone lights up at night, and similar loads are too concentrated, which will cause serious pollution to the power grid. For 30W to 40W LED drive power, it is said that in the near future, there may be certain index requirements for the power factor.

There are two kinds of traffic now: one is a constant voltage source for multiple constant current sources, and each constant current source supplies power to each LED separately. In this way, the combination is flexible, and LED failures along the way will not affect the work of other LEDs, but the cost will be slightly higher. The other is direct constant current power supply, LEDs run in series or parallel. Its advantage is lower cost, but poor flexibility. It also needs to solve the problem of one LED failure, which does not affect the operation of other LEDs. These two forms coexist for a period of time. Multi-channel constant current output power supply method will be better in terms of cost and performance. Maybe the mainstream direction in the future.

LED anti-surge capability is relatively poor, especially anti-reverse voltage capability. It is also important to strengthen this protection. Some LED lights are installed outdoors, such as LED street lights. Due to the induction of the grid load and the induction of lightning strikes, various surges will be invaded from the grid system, and some surges will cause damage to the LEDs. Therefore, the LED drive power must have the ability to suppress the intrusion of the surge and protect the LED from damage.

For external installation of lamps, the power supply structure must be waterproof and moisture-proof, and the shell must be resistant to sunlight.

9, to meet the requirements of safety regulations and electromagnetic compatibility.

With the increasing application of LED, the performance of LED driving power will be more and more suitable for LED requirements.