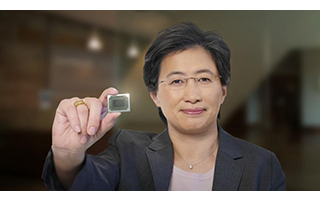 Dr. Lisa Su, President and CEO of AMD, said: "In 2018, based on the release of high-performance products, we have achieved significant growth in turnover for two consecutive years, increasing market share, gross profit. Increased and increased profit margins. More importantly, our Opteron processor shipments have more than doubled, and we completed record data center GPU turnover this quarter, despite recent exposure to graphics card sales. Impact, but 2019 will still be an exciting year, as we will release the next generation 7nm Athlon processor, Radeon graphics card and Opteron processor products, which is a wide-ranging and competitive product portfolio."

1. Thanks to the growth in turnover of the Computing and Graphics Division, the total turnover in 2018 was US$ 6.48 billion, a year-on-year increase of 23%.

6. Cash, cash equivalents and marketable securities at the end of the year totaled $1.16 billion, slightly lower than the $1.18 billion at the end of 2017.

Today, AMD announced its official entry into the seventh revision of the wafer supply agreement with GLOBALFOUNDRIES Inc. (GF). GF will continue to be AMD's long-term strategic partner, providing AMD with 12nm and above node wafers, and the revised terms clarify the purchase commitments from 2019 to 2021 and the pricing of nodes at 12nm and above. The revised terms also give AMD the flexibility to purchase wafers of 7nm and below from any other factory without paying a one-time purchase or patent fee.

At CES 2019, AMD emphasizes that AMD is expected to achieve a historic leap in computing, gaming and visualization technology in 2019 based on a close integration of the top 7nm process with industry-leading computing and graphics card design.

3. AMD has released a full line of notebook processor products to further expand its coverage in the growing PC market:

6, the first benchmark of the Chromebook notebook market, the 7th generation AMD A series processor. Both Acer and HP released products based on these new processors at the show.

Based on market capitalization, AMD ranks among the NASDAQ-100 Index (composed of the top 100 non-financial companies in the NASDAQ stock market).

At the Next Horizon conference in November 2018, AMD demonstrated 7nm computing and graphics products that bring innovation to the data center:

AMD shares the new details of the upcoming "Zen 2" processor core architecture, detailing its revolutionary x86 CPU design based on "Chiplet", an enhanced version of the AMD Infinity Fabric interconnect in a single processor package Link multiple independent silicon wafers. AMD first publicly demonstrated the next-generation AMD Opteron processor based on the "Zen 2" core, offering up to 64 cores per slot and revolutionary I/O.

The new win-win and deployment of the data center demonstrates the strength of AMD Opteron processors and AMD Radeon InsTInct products in high-performance computing devices:

3. The US Department of Energy announced the NERSC-9 supercomputer "Perlmutter" based on the new AMD Opteron processor, which is scheduled to be delivered in 2020.

3. AMD released the AMD RadeonTM Software Adrenalin 2019 EdiTIon version driver to bring the next-generation software suite to AMD RadeonTM GPUs. Compared to the previous version, the new drivers have an average performance improvement in the current mainstream game masterpieces. %, new features include PC-to-VR streaming over a standalone device over a Wi-Fi network.